Apologies for lack of recent posts...

...I'm on deadline to finish my book, Why Fathers Matter, and so I have limited time to break out items for the blog.

Delays in family court: What price do our children pay?

For my speculation on the possible consequences of extensive delays in family courts across the country--delays in cases involving child abuse and neglect, among other things--see my first post on True/Slant. And please leave a comment here or there.
Posted by Paul Raeburn at 1:08 PM No comments:

What makes a fit parent?

Public Radio International's The Takeaway had a piece  this morning about a quadriplegic mother who risks losing her child to the child's father (her ex-boyfriend) who is arguing that she is incapable of caring for the child because of her disability.

There's an interesting bit near the end of the piece when the conversation takes a turn toward what makes a fit parent. And Lisa Belkin, the Motherlode blogger who talks about families every Monday on The Takeaway, observes that some working mothers are losing custody of their children because the father spends more time with the children.

As I noted in a different case in my previous post, this seems unfair on the surface. Just because mothers work to support their children--a good thing, we might argue--they stand to lose custody in a break-up?

If it's unfair, it's been unfair to millions of fathers for decades--fathers who lost custody on precisely those grounds.

If we're going to change the rules to be fair to working parents, let's make sure we make them equally fair to mothers and fathers.
Posted by Paul Raeburn at 4:04 PM No comments: 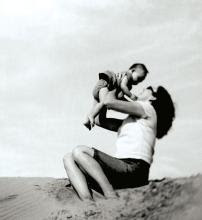 Julie Michaud was a working mother in Boston; her husband, Mark, was a stay-at-home dad. When the two divorced, Julie sought and expected joint custody of their two children, 5 and 7. She was shocked when Mark, who asked for primary custody, got it.

According to an article by Sally Abrahms on workingmother.com, some 2.2 million mothers in this country do not have primary physical custody of their children. "Not long ago," the article says, "men usually paid the child support and doled out the alimony. Moms (working or not) almost always got the kids in messy divorce wars. Years of changing diapers, wiping noses and kissing boo-boos gave them the edge. But now the tide is turning."

Is this a good thing or a bad thing? Abrahms doesn't take a position, except to note, near the end of her piece, that it's best for children to have good relationships with both of their parents.

I'd suggest that it's still true that mothers almost always get the kids, and that the courts should not take such a reflexive approach. If the growth in the number of working mothers means more fathers get the kids--if judges are forced to judge, rather than dole out the kids by rote--that could be a good thing.

Let's ask our judges to make the decision that's best for the children, not just give mothers the kids.

Here's an intriguing book title. It just caught my eye, but the title suggests its at odds with what I've been arguing here, that fathers are important for children, both boys and girls.

Just noting it here. If you're familiar with this book or its author, Peggy Drexler, let me know. And more on this soon.
Posted by Paul Raeburn at 5:39 PM No comments:

Remember that amusing piece of camping gear that includes a folding fork, spoon, and knife? Zachary Christie, a public-school student in Delaware, and a new Cub Scout, was so excited to get one when he joined the scouts that he took it to school to use it for lunch.

According to a story in The New York Times, Zachary now faces 45 days in the school district's reform school.That's him in the picture. Take a look. Reform school?

The Times writes that "based on the code of conduct for the Christina School District, where Zachary is a first grader, school officials had no choice. They had to suspend him because, 'regardless of possessor’s intent,' knives are banned."

The issue here is proper exercise of judgment. Yes, the code of conduct allows no exceptions. But a teacher could have quietly explained to the boy that the utensil was not permitted and quickly pocketed it.

If you find this outrageous, suspend your outrage for a moment. Because the story also reports that last year, a third-grader was expelled--expelled!--because her grandmother sent her to school with a birthday cake and a knife to cut it with.

Again, a little exercise of judgment might have been in order. Cut the cake, have the party, and send the knife home at the end of the day. Consider the knife in the possession of the teacher, not the student.

What lesson are those teachers teaching? Maybe it's this: Don't trust authority, don't trust your teachers, because what they are doing is absurd, even in the eyes of a third-grader.

Update, Wednesday morning, Oct. 14: The Associated Press reports that the Christina School Board in Delaware voted unanimously yesterday to reduce the punishment for kindergartners or first-graders who take "weapons" to school to suspensions of three to five days. Even that milder punishment seems silly int his case, but I suppose we count this as progress.

The good news for Zachary? He can return to school.

Posted by Paul Raeburn at 11:20 AM No comments: 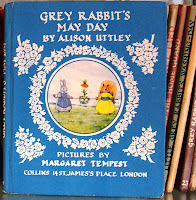 Fascinating interview in Saturday's New York Times with the writer A.S. Byatt on her new novel, The Children's Book. The central character is a writer of children's books, and Byatt says the idea of the novel came to her because she had been thinking about how child-rearing changed in the late-Victorian era.

“People began talking to their children as people,” Byatt tells interviewer Charles McGrath. “They even took tea with them. That’s a change — you wouldn’t find it in Dickens or Jane Austen. And this also coincides with Freud’s deciding that everything comes from childhood and discovering all sorts of little dark things there, even if they weren’t true.”

I don't know much about that, but her comment made me instantly interested. Then I read on a few more grafs, and found this: Byatt says she was struck by “all the children of the children’s writers who killed themselves."

Alison Uttley is one writer she mentions, who wrote stories about rabbits and hedgehogs. Her son grew up and married a woman Uttley didn't like. The son drove his car off of a cliff.
Posted by Paul Raeburn at 10:50 AM No comments:

From my About Fathers blog at Psychology Today...

A childless man was released from jail, where he had been sent for non-payment of child support.

Despite what surveys say, we do enjoy our kids 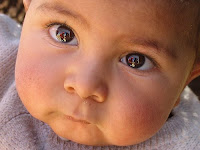 "I enjoy spending time with my kids."

I'll wager that most of us would agree with that statement. But psychologists have long told us otherwise. When people are asked what they enjoy, they put outdoor activities and watching television far above spending time with their kids. (Sex also comes in around mid-list; we'll save speculation on that for another day. In the meantime, if I ever say I enjoy TV more than sex, shoot me.)

Now a couple of British academics --Matthew White and Paul Dolan -- are telling us what we suspected all along: There was something wrong with those surveys.

In a study published in Psychological Science, they queried people about what they found pleasurable, and got the standard answers, as above. But they also inquired about something else: What do you find meaningful or worthwhile? Work topped the list, and spending time with children wasn't far behind.

I find spending time with my kids rewarding, meaningful, and almost always fun.

I'm not counting time spent with a crying child between, say, midnight and 5 am.
Posted by Paul Raeburn at 11:01 AM No comments:

A fathers' right to know? 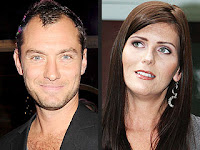 Last week, the actor Jude Law released a statement saying he was going to be a father. People magazine and others have reported that the mother is a 24-year-old aspiring actress named Samantha Burke.

Law's statement suggested he was surprised by the news. And if the relationship was last year, that means the baby must be due soon, either in August or September.

So while we don't know for sure, it appears that Law found out he was having a child only during the last few months of the mother's pregnancy. Surprise.

Should Law have known earlier? Burke didn't have to tell him at all; she might have chosen to keep the matter to herself, and Law would never know he has another child in the world.

Should Burke have been obligated to tell Law? Would we want such a requirement to be written into law?

Should a father have a right to know when he's going to have a child?
Posted by Paul Raeburn at 2:09 PM 1 comment:

Paul Raeburn
I am a journalist and blogger, and the author of "Do Fathers Matter-The new science of fatherhood," to be published in 2013. I am also chief media critic at the Knight Science Journalism Tracker at MIT, and a frequent contributor to The Huffington Post, The New York Times Magazine, Scientific American, Technology Review, and Psychology Today, among many others. My most recent book, "Acquainted with the Night," was a memoir of raising children with depression and bipolar disorder. I am a former science editor at Business Week and the Associated Press.

Blogs about fathers, and friends' blogs